After two months of studio work at PUCE and two in situ workshops (one participatory design process and one validation meeting) we produced a proposal for Chamanga’s public space and park which adheres to the principles which emerged mostly out of the deliberations with people of the community, and express the consensus of the desires and aspirations of the “Chamangeños” themselves.

The  location chosen for Chamanga’s park is strategic. It connects the Malecon (the waterfront and the piers) and the coastal residential zone with the “Camaroneras” (the flooded fields used as shrimp farms), the Isla de las Palmas and the northern part of the village. The limits of the park are set by the new road (28 de Octubre) on the north and right, the Camaroneras on the left and the Malecon on the south.

The connection between these three points is a key element of the proposal. It is located at the opening of two major entrances to the park: the one lies at the southern part (for a better connection with the Malecon) and the other close to the residential zone, where most of the people will enter the park from. This functions like a “funnel” that leads the people into the heart of the park. It also creates a visual connection with the sea from the first moment of the visitor’s entrance to the park.

At the same time, this central axis defines two separate zones (resembling, and therefore referred to as “the two lungs”) which host various activities. The right one which is closer to the camaroneras is selected mainly as a green zone, with mostly tall and dense vegetation (as part of a reforestation plan), while the one closer to the residential area is selected mainly as a space for activities with lower and less vegetation. Natural and local materials were selected for our proposal for the public space/park of Chamanga. The central part is covered with compact earth, while the spaces right and left from it are covered with vegetation. At some certain parts, sitting areas are found, where trees provide natural shade. Moreover, all along the park eye contact with the Malecon and the sea is offered to visitors. 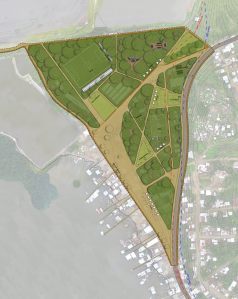 One of the most important area of activities -as well as one of the main desires expressed by the residents during the workshop- is the playground, which is surrounded by vegetation.

The new football field, currently under construction near the school, is maintained as is, and is connected with the central zone as well as with other parts of the park through a proposed path network. It is surrounded by dense vegetation and acquires a multifunctional identity as with the addition of a sitting place it can be used as an events area too. 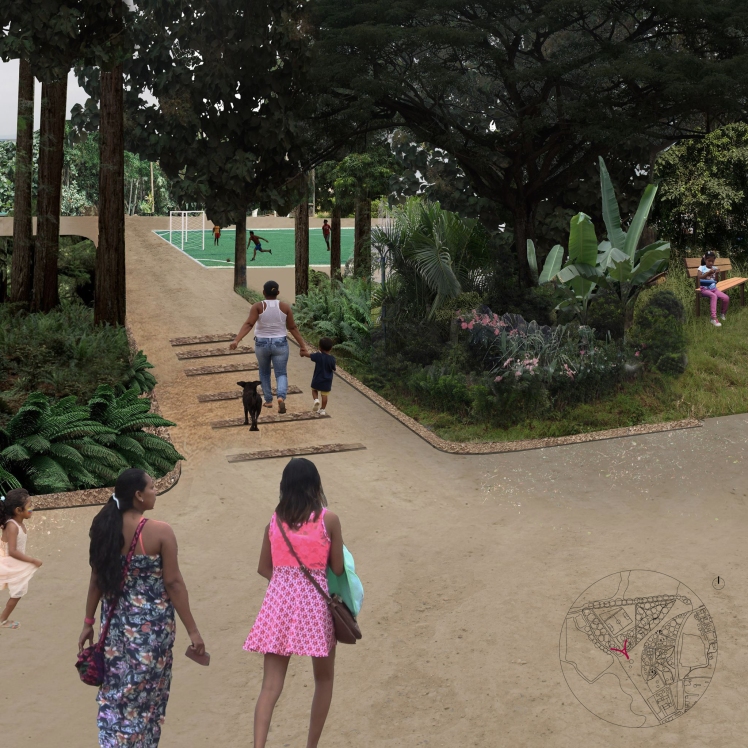 Along the camaroneras border a road that connects the entrance of the park with the existing path that leads to Las Palmas is created. This road includes a bikeway that encircles the entire park and lighting for extra safety during the night. The manglar is placed as a natural boundary to the camaroneras. 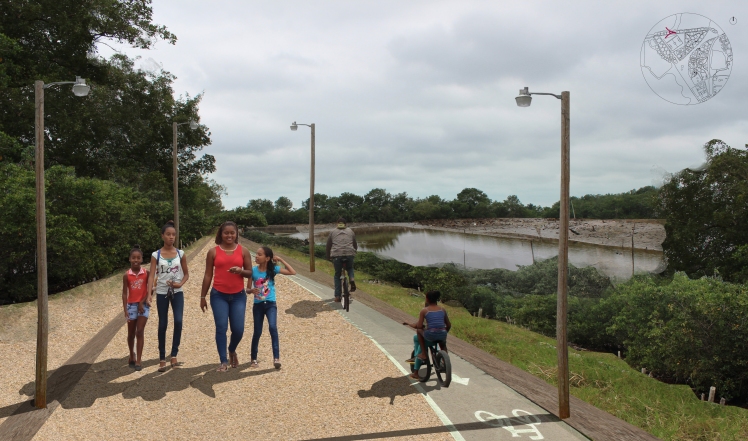 The presentation of our proposal: